The ADN4690E / ADN4692E / ADN4694E / ADN4695E are multipoint, low voltage differential signaling (M-LVDS) transceivers (driver and receiver pairs) that can operate at up to 100 Mbps (50 MHz). Slew rate control is implemented on the driver outputs. The receivers detect the bus state with a differential input of as little as 50 mV over a common-mode voltage range of −1 V to +3.4 V. ESD protection of up to ±15 kV is implemented on the bus pins. The parts adhere to the TIA/EIA-899 standard for M-LVDS and complement TIA/EIA-644 LVDS devices with additional multipoint capabilities. 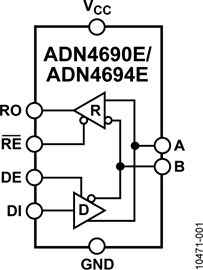 The ADN4690E / ADN4692E are Type 1 receivers with 25 mV of hysteresis, so that slow-changing signals or loss of input does not lead to output oscillations. The ADN4694E / ADN4695E are Type 2 receivers exhibiting an offset threshold, guaranteeing the output state when the bus is idle (bus-idle fail-safe) or the inputs are open (open-circuit fail-safe).